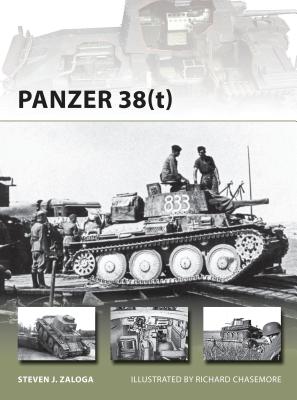 This is book number 215 in the New Vanguard series.

Panzer 38(t) provides an in-depth look at one of most little known yet advanced tanks of its day, a Czech vehicle that would become one of Germany's armored workhorses during the early campaigns of World War II.

The Munich Agreement in 1938 and the subsequent German annexation of the Czech provinces of Bohemia-Moravia in 1939 put Germany in control of the large Czech armament industry. Among the crown jewels of the industry was the new LT.38 light tank. A very modern design, the LT.38 was among the best tanks in the world at the time, and was just beginning to come into service at the time of the German occupation. Absorbed into the Wehrmacht as the PzKpfw 38(t), it was one of the few foreign designs to remain in production for German service. A handful saw combat in Poland in 1939, but the PzKpfw 38(t)'s main claim to fame was in the Battle of France in 1940 when three German divisions were equipped with the Czech tank, including Rommel's 7th Panzer Division. The PzKpfw 38(t) became one of the key weapons in the German invasion of Russia in the summer of 1941, and was widely used in the campaigns of 1941-42. With the advent of the Soviet T-34 tank, the days of the PzKpfw 38(t) as a battle tank were limited since it was too small to accommodate a larger gun in its turret. Nevertheless, it was rebuilt with larger anti-tank guns in open casemates, and so it had a second life as the basis for many German Panzerjager or tank destroyer designs. Besides the basic LT.38 design, a number of export derivatives were manufactured for a diverse range of customers including Iran and Peru. The PzKpfw 38(t) was also exported to a variety of Germany's allied armies including Hungary and Romania.