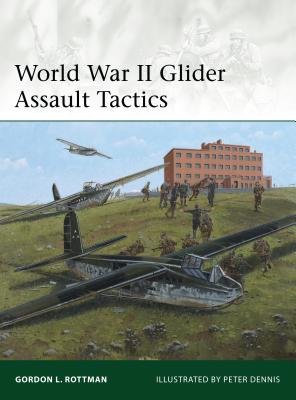 This is book number 200 in the Elite series.

This book explains the development and organization of World War II glider troops, their mounts, and the air squadrons formed to tow them; the steep and costly learning-curve, as armies and air forces worked out the techniques needed to carry and deliver men and equipment safely to the chosen landing zones; and the tactics that such troops learned to employ once they arrived on the battlefield. All these aspects are illustrated by reference to famous operations, including the German assault on Crete (1941), the Allied assault on Sicily (1943), the Allied Normandy landings and Operation Market Garden (1944), the Rhine crossings (1945), and also the Allied operations in Burma to insert and resupply the "Chindits" behind Japanese lines (1944).

The major weakness of the military paratrooper is the limited load of kit that he can carry during the jump, making his combat endurance short unless he is quickly re-supplied. Military gliders came of age in World War II, when glider-assault infantry were the forerunners of today's helicopter-delivered airmobile troops. From the light pre-war sports and training machines, several nations developed troop-carrying gliders capable of getting a whole squad or more of infantry, with heavy weapons, onto the ground quickly, with the equipment that paratroopers simply could not carry. Gliders were also developed to carry light artillery, antitank guns, jeeps, and even special lightweight tanks. They made up at least one-third of the strength of US, British, and German airborne divisions in major battles, and they also carried out several daring coup de main raids and spearhead operations. However, the dangers were extreme, the techniques were difficult, the losses were heavy (particularly during night operations), and the day of the glider assault was relatively brief.

Gordon L. Rottman entered the US Army in 1967, volunteered for Special Forces and completed training as a weapons specialist. He served in the 5th Special Forces Group in Vietnam in 1969–70 and subsequently in airborne infantry, long-range patrol and intelligence assignments until retiring after 26 years. He was a Special Operations Forces scenario writer at the Joint Readiness Training Center for 12 years and is now a freelance writer, living in Texas.
“Covers the origins, the gliders, the glider types, tug aircraft, glider pilots, glider delivered units and glider operations. Each section is broken down covering how each country used their gliders, how they trained their pilots and how operations were executed. I highly recommend this book to anyone that has an interest in military history or the gliders of World War II.” —Mike Van Schoonhoven, IPMS/USA