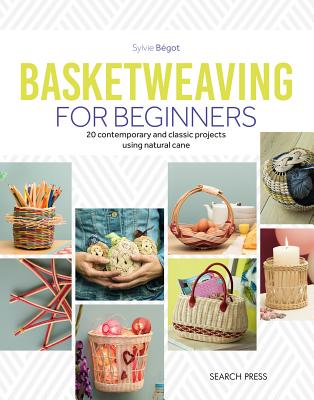 
Special Order—Subject to Availability
Create 20 simple, modern basketry projects for use inside and outside the home.

Create twenty basketweaving projects from interior decorations to garden accessories, in shapes both classic and unusual (such as egg shapes and napkin rings).

Author Sylvie Begot uses coloured rattan to update what is a traditional craft, and uses simple techniques which are extensively explained through clear step by step photographs and instructions.

Anyone can create one of these basketry projects - no special skills are required, and the baskets can be made at home.
Creative from a young age, Sylvie Begot put her interest in crafts on hold to train as a paramedic, only to return to her interest in basketry during maternity leave for her third child. She then began to share her passion for basketweaving through workshops.

Sylvie's need to source and create specific teaching materials led her to publish her first book on the subject, Cane Basketry (Vannerie en rotin) in France in 2007. Prior to the publication of Vannerie Creative (Basketweaving for Beginners), Sylvie published another four books on basketry in her native France.

Sylvie Begot now runs basketry workshops for schoolchildren as well as for trainee occupational therapists, in Lyon, France. She has a particular interest in basketry using natural products such as cane, willow and rattan as well as upcycled materials.