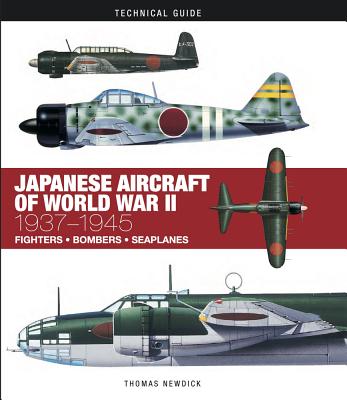 
Not On Our Shelves—Ships in 1-5 Days
Illustrated with detailed artworks of Japanese aircraft and their markings, Japanese Aircraft of World War II is a detailed guide to all the aircraft deployed by the Japanese military from the Second Sino-Japanese War to the surrender in the Pacific in August 1945. Organized alphabetically by manufacturer, this book includes every type of aircraft, from fighters to seaplanes, bombers, reconnaissance aircraft, torpedo bombers and carrier aircraft. All the best-known types are featured, such as the Mitsubishi G4M 'Betty', Nakajima B6N2 Tenzan, Aichi B7A2 Ryusei torpedo bomber and the world- famous Mitsubishi A6M 'Zero' fighter. The entries are accompanied by exhaustive captions and specifications. The guide is illustrated with profile artworks, three-views, and special cutaway artworks of the more famous aircraft in service, such as the Aichi D3A1 'Val', Mitsubishi A6M2 Reisen, and Nakajima Ki.27 'Nate'. Illustrated with more than 120 artworks, Japanese Aircraft of World War II is an essential reference guide for modellers and enthusiasts with an interest in military aircraft of World War II.
An aviation and defence writer and editor, Thomas Newdick is based in Germany, from where he has researched and written numerous articles for various specialist magazines and journals examining aviation - both military and civilian, 20th century military history, and defence technology. He is a regular contributor to Combat Aircraft and Aircraft Illustrated magazines. He is on the editorial staff of both Guideline Publications and Aeroplane.