The Wehrmacht: The Growth and Organisation of German Land Forces (Paperback) 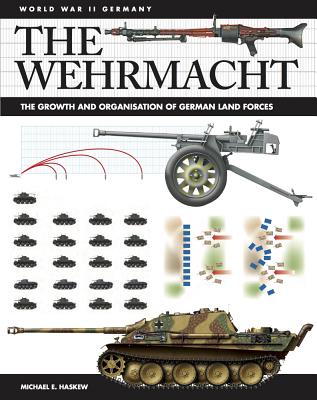 The Wehrmacht: The Growth and Organisation of German Land Forces (Paperback)


Special Order—Subject to Availability
The Wehrmacht (meaning 'defensive might') encompassed the entire German armed forces during World War II. Rising from the ashes of the post-World War I Reichswehr in 1935, the Wehrmacht became one of the cornerstones of Hitler's re- assertion of German military might. More than 18 million men passed through the ranks of the Wehrmacht over of the 10 years of its existence. World War II Germany: The Wehrmacht focuses on the German land forces, with chapters on the history of the German Army, pre-war development, command structures, infantry, armoured formations, artillery and support services. The book offers interesting facts and figures of every sort, from infantry tactical doctrine through the make-up of a Type 1944 infantry division to the number of operational panzers Rommel had at his disposal during the El Alamein campaign and the types of artillery employed in the Atlantic Wall fortifications before the D-Day landings. The book includes color artworks of key equipment and weapons, reference tables, diagrams, maps and charts, presenting all the core data in easy-to-follow formats. Packed with hundreds of helpful illustrations, World War II Germany: The Wehrmacht offers military history enthusiasts key data on every aspect of Germany's ground forces during World War II.