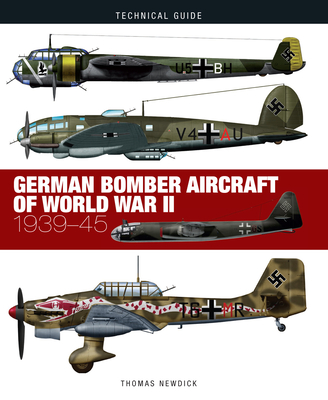 
Not On Our Shelves—Ships in 1-5 Days
Thishighly illustrated guide to the main types of aircraft used by the German Luftwaffe during World War II is perfect for aviation buffs and military modelers. From the Junkers Ju 87A Stuka dive bomber and the Dornier Do 17Z-2 used in the invasion of Poland, to the more sophisticated Arado Ar 234B-2, Heinkel He 177, and Junkers Ju, this aviation resource offers a comprehensive survey of German aircraft, organized by type. It showcases dive-bombers, two-seaters, ground-attack aircraft, night bombers, strategic bombers, and maritime bombers--like the classic Focke-Wulf Fw 200 Condor and the less-familiar Heinkel He 111H-2 designed to launch V-1 flying bombs. Each featured profile includes authentic markings and color schemes, while every separate model has exhaustive specifications.
An aviation and defense writer and editor, Thomas Newdick is based in Germany. He has researched and written numerous articles for various specialist magazines and journals examining aviation, both military and civilian; twentieth-century military history; and defense technology. He is a regular contributor to Combat Aircraft and Aircraft Illustrated magazines. He is on the editorial staff of both Guideline Publications and Aeroplane.