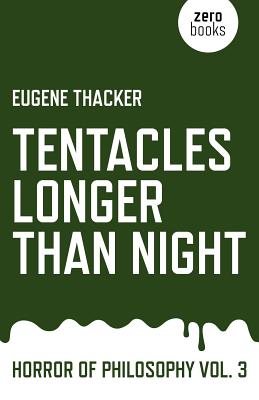 
Backordered
Our contemporary horror stories are written in a world where there seems little faith, lost hope, and no salvation. All that remains is the fragmentary and occasionally lyrical testimony of the human being struggling to confront its lack of reason for being in the vast cosmos. This is the terrain of the horror genre. Eugene Thacker explores this situation in Tentacles Longer Than Night. Extending the ideas presented in his book In The Dust of This Planet, Thacker considers the relationship between philosophy and the horror genre. But instead of taking fiction as the mere illustration of ideas, Thacker reads horror stories as if they themselves were works of philosophy, driven by a speculative urge to question human knowledge and the human-centric view of the world, ultimately leading to the limit of the human--thought undermining itself, in thought. Tentacles Longer Than Night is the third volume of the "Horror of Philosophy" trilogy, together with the first volume, In The Dust of This Planet, and the second volume, Starry Speculative Corpse.
Philosopher Eugene Thacker thinks and writes about a world of natural disasters, emerging pandemics, and the looming threat of extinction. Existence, he writes, is becoming increasingly "unthinkable." He has written on a range of topics, from philosophy to science fiction and horror. Thacker is the author of a number of books, including After Life (2010), and In the Dust of this Planet in his Horror of Philosophy series. He is Associate Professor of Media Studies at The New School in New York.