The Note-Books of Captain Coignet: the Recollections of a Soldier of the Grenadiers of the Imperial Guard During the Campaigns of the Napoleonic Era-- (Abridged / Hardcover) 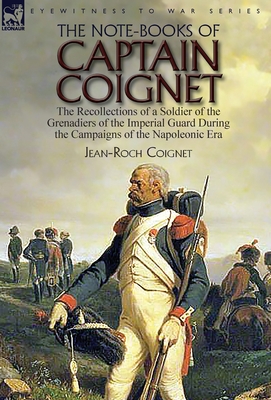 The Note-Books of Captain Coignet: the Recollections of a Soldier of the Grenadiers of the Imperial Guard During the Campaigns of the Napoleonic Era-- (Abridged / Hardcover)

The famous recollections of a soldier of Napoleon's Imperial Guard

Several English language translations of recollections written by the soldiers of Napoleon's Grande Armee have become famous as they bring the exuberant days of the First Empire of the French vividly back to life. Infantryman Sergeant Bourgogne's account of the 'Retreat From Moscow' and Parquin's and Marbot's wonderfully related experiences as light cavalry officers are fine examples. There can be no doubt however, that Jean-Roch Coignet's highly informative and readable account of his long career in the Grenadiers of the Imperial Guard is one of the most important French military memoirs of that period. From his difficult childhood to his time campaigning in the armies of the revolutionary period in Italy, from the campaigns and battles of the empire which set Europe ablaze to the snows of the disastrous Russian campaign, and finally to the fall of the emperor whom he idolised, Coignet served Napoleon loyally. Steadily rising to the rank of captain, Coignet rallied to his master's banner for the 'Hundred Days' which led to ultimate defeat at the Battle of Waterloo, 1815. Abridged versions of this book have been published many times, but this Leonaur edition is not only complete but also includes two useful introductions which will be invaluable to students of both the times and the man. 'The Illustrated Captain Coignet' containing over 100 historically accurate drawings by Julien Le Blant is also available from Leonaur.