The Napoleonic Campaign of 1805: Ulm, Austerlitz and the Campaign in Italy and the Tyrol (Paperback) 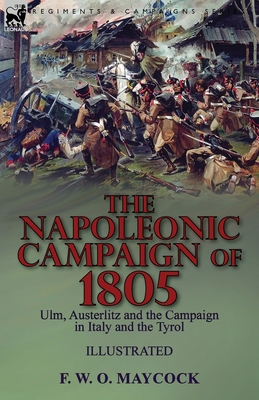 The Napoleonic Campaign of 1805: Ulm, Austerlitz and the Campaign in Italy and the Tyrol (Paperback)

Napoleon at the pinnacle of his military genius

Captain Maycock, of the Suffolk Regiment, was the author of several concise histories of military campaigns, including those of the Napoleonic era. These were primarily written for a military readership, but are of interest to a wider audience who study military history. Modern readers appreciate that Maycock's works were written from the perspective of the later 19th century, but this makes them no less useful. The campaign analysed in this book was a triumph for Napoleon following his disappointment at having to abandon his scheme to invade Britain and the defeat of the Franco-Spanish navies at Trafalgar by the Royal Navy. Turning away from the sea, Napoleon's genius was unfettered in a land-based campaign and he marched to the east gaining victories at Ulm and Austerlitz which put an end to the third coalition of allies who opposed him. Maycock's text concludes with an assessment of the campaign in Italy and the Tyrol. This Leonaur edition has been enhanced by the inclusion of maps and illustrations which were not in the original edition .