The Australian Victories in France in 1918: the Battles of the Australian Army on the Western Front During the Final Year of the First World War (Paperback) 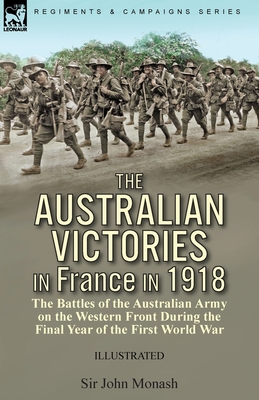 The Australian Victories in France in 1918: the Battles of the Australian Army on the Western Front During the Final Year of the First World War (Paperback)

The final battles of the great conflict

Sir John Monash, the author of this book, is widely considered to be one of the finest Allied general officers of the First World War and the most famous Australian military commander. He served during the ill-fated Gallipoli Campaign, but is most highly regarded for his service on the Western Front. In May 1918 he became commander of the Australian Corps, at that time the largest army corps in theatre. The successful attack of the Battle of Amiens in August, 1918 was planned by Monash and spearheaded by his Australians and Canadian forces together with the British III Corps. This engagement turned the tide of the war in the West comprehensively reversing Germany's Ludendorff Offensive in 1918. This book chronicles the pursuit of the retreating German Army from Chuignes, Mont St. Quentin, Peronne, Hargicourt and, following the contribution of American forces, Bellicourt, Bony and Montbrehain to the Hindenburg Line and the end of hostilities. Contains maps and photographs.