The March to Hougoumont: Lord Saltoun & the First Guards from Sicily, Walcheren and the Peninsular War to Waterloo (Hardcover) 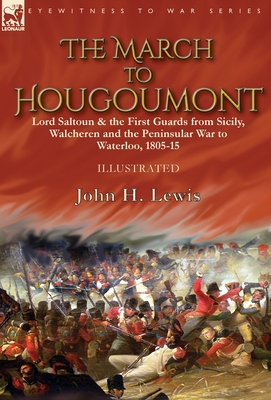 The March to Hougoumont: Lord Saltoun & the First Guards from Sicily, Walcheren and the Peninsular War to Waterloo (Hardcover)

This is the story of an elite infantry regiment of the British Army; the First Regiment of Foot Guards--which became the Grenadier Guards, during a particularly active and significant period of its long and illustrious history. It also is the story of a young man who served with the Guards as an officer, Alexander Fraser, Lord Saltoun, principally recounted through his journals and correspondence. It is a story of wars and campaigns fought against the First Empire of the French under the enigmatic leadership of Napoleon Bonaparte, and so it also concerns the emperor's nemesis the Duke of Wellington. All these elements are drawn together in these pages. Saltoun and his regiment marched for a decade on roads that ran through Sicily, the Peninsular War in Portugal, Spain and France and the Low Countries, until they arrived at a cataclysmic rendezvous during which, over a three day period in 1815, they took part in the most famous battles in the annals of British conflict at Quatre Bras and Waterloo. Saltoun fought in both battles, notably in the defence of Hougoumont, a chateau-farm transformed into a bastion and the key of the right of Wellington's defensive line at Waterloo, but also within the squares beleaguered by French cavalry and in the final attack that brought the Imperial Guard and Napoleon's plans to ruin. Quite unpredictably this fascinating account also involves a love story. Includes many illustrations, including new three-dimensional views of Hougoumont which were created especially for this book.

This Leonaur original title is available in softcover and hardback with dustjacket.