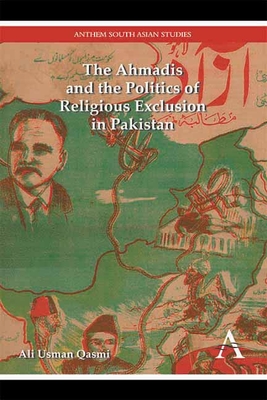 Winner of the Karachi Literary Festival Peace Prize 2015, 'The Ahmadis and the Politics of Religious Exclusion in Pakistan' traces the history of the political exclusion of the Ahmadiyya religious minority in Pakistan by drawing on revealing new sources. The Ahmadis believe Mirza Ghulam Ahmad of Qadiyan (1835-1908) was a prophet (in a nuanced understanding of this term) and promised messiah. This led to the group's condemnation as infidels during the colonial period, setting in course a painful history of religious exclusion.

Part I of this volume traces the development of the anti-Ahmadi movement from its origin in Punjab province, where an agitation movement was launched calling upon the central government to declare the Ahmadis officially non-Muslim. After the movement intensified, leading to proclamation of martial law in Lahore in 1953, the Punjab government held a court of inquiry, which released its report in 1954. The proceedings of the Munir-Kiyani inquiry commission has now become available to scholars, and is a key focus of analysis. Part II focuses on the developments in Pakistan's politics that created a discursive space where legislative measures against the Ahmadis could be deliberated and adopted by the national assembly, and argues Pakistan's first general elections in 1970 reflected the entrenchment of religious leaders in Pakistan's power politics. The national assembly's 1974 session saw Ahmadis unanimously declared as non-Muslims; the records of this session's debates are extensively reviewed in this book.

A truly path-breaking study, this work goes beyond merely chronicling the details of anti-Ahmadi violence and the legal and administrative measures adopted against them, to address wider issues of the politics of Islam in postcolonial Muslim nation-states and their disputative engagements with the ideas of modernity and citizenship.

Ali Usman Qasmi is an assistant professor of history at the School of Humanities and Social Sciences at Lahore University of Management Sciences.