The Military and Denied Development in the Pakistani Punjab: An Eroding Social Consensus (Hardcover) 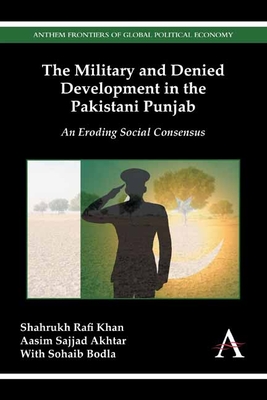 The Military and Denied Development in the Pakistani Punjab: An Eroding Social Consensus (Hardcover)

Military power has long been a serious obstacle to a sustained democracy in Pakistan. The authors investigate the Pakistani military's retrogressive agrarian interventions in the Punjab, and outlines a change, as recognised by society, in the military's rightful function within the economy.

Set against the social resentment instigated by the military's agricultural land grabbing, and a burgeoning resistance to the military's overbearing and socially unjust role in Pakistan's economy, this book supplements a larger body of work detailing the military's hand in industrial, commercial, financial and real estate sectors. Any gain in economic autonomy wielded by the military makes it less answerable to civilian oversight, and makes it more likely to act to protect its economic interests.

The survival of civilian rule in Pakistan, which is critically important for the foreseeable future, requires a fundamental reordering of the balance of power between state institutions, and between state and society. Pakistan, long encumbered by the military yoke, has witnessed its first peaceful transition from one political administration to another; and in a move congenial to the consolidation of this democratic process, 'The Military and Denied Development in the Pakistani Punjab' exposes the nefarious nature of the military's predation, and signals a move for the military to be contained to its constitutionally mandated role - defence.

Shahrukh Rafi Khan is a Visiting Professor of economics at Mount Holyoke College, South Hadley, Massachusetts. Aasim Sajjad Akhtar is Assistant Professor of political economy at the National Institute of Pakistan Studies, Quaid-i-Azam University, Islamabad, Pakistan. Sohaib Bodla is currently working as a freelance writer and researcher, and as a volunteer for NGOs including the Dutch development organization, Cordaid.