On Set with John Carpenter (Hardcover) 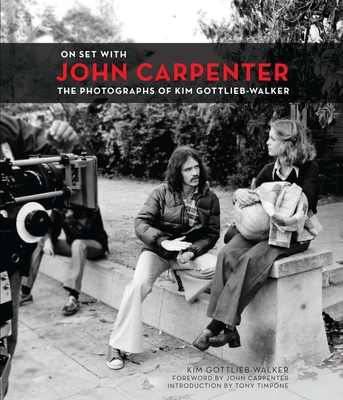 On Set with John Carpenter (Hardcover)


Special Order—Subject to Availability
John Carpenter’s producing partner Debra Hill hired photographer Kim Gottlieb-Walker to be the unit photographer on Halloween, and Kim soon became part of Carpenter’s filmmaking family, going on to shoot stills on the sets of some of his most iconic films:


Collected together here for the first time is the best of that on-set photography, with iconic, rare, and previously unseen images. All accompanied by exclusive commentary from those involved, including John Carpenter himself, and other key crew and cast.

From production stills, to candids of the stars between takes, and the crew in action, alongside portrait shots of the actors who would eagerly pose for Kim, this book gives an unprecedented glimpse into the action on set with John Carpenter.
Kim Gottlieb-Walker’s photos have appeared in numerous magazines including Music World, Feature, Rolling Stone, Newsweek and People. She worked for Island Records, covering reggae performers all over Jamaica and shot the iconic High Times cover of Bob Marley. She has worked for over 40 years as a movie still photographer, including on Halloween, The Fog, and Escape from New York.
"Absolutely gorgeous...an excellent visual memoir." - Project Fandom

"Gottlieb-Walker has an amazing eye and the best compliment I can give to her is that there are at least 10 images in this book I'd buy large prints of if I could." - Aint it Cool

"Whilst On Set with John Carpenter can be appreciated on an aesthetic level, if one so chooses to look a little deeper, then this collection can offer a deeper discussion and appreciation of the still image; it’s relationship to the moving image and the triangular collaborative relationship of artist, subject and audience." - Pop Matters

"You can have your blu-ray box sets; this is the HALLOWEEN collectible of the year." - Badassdigest.com