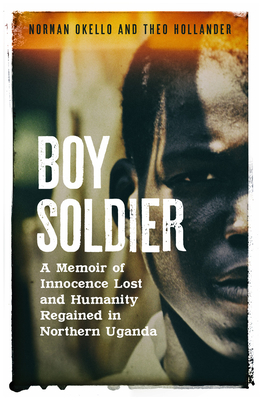 By Norman Okello, Theo Hollander (With)


Not On Our Shelves—Ships in 1-5 Days
Uganda's civil war with Joseph Kony's Lord's Resistance Army has raged since the early 1990s, claiming over 100,000 lives and displacing around 1.5 million people. The LRA are a rebel force who combine religious mysticism with extreme brutality, infamous for abducting tens of thousands of children for use as soldiers and forcing them to commit unspeakable violence. Their insurgency continues to this day, though most of us know little about it. Boy Soldier tells the story of one of the children who fell victim to this forgotten war. After an idyllic childhood, Norman Okello was abducted by the LRA at the age of twelve. In captivity, he was subjected to a ruthless training regime aimed at turning him into a killing machine free from conscience and fear. Norman's struggled constantly to stay alive while maintaining his humanity, and he eventually managed to escape his ordeal. But having fled the clutches of the LRA, he was faced with the task of trying to reintegrate into a society that feared and despised him. Harrowing, inspiring and enlightening in equal measure, Boy Soldier is above all a story of survival and redemption against unbelievable odds.
Norman Okello is a former child soldier from northern Uganda, abducted at the age of twelve by one of the most notoriously violent rebel forces in the world. Norman was forced to make brave and difficult choices that not only kept him alive, but also made him a role model to mankind on the ability to overcome hardship, overcome hatred, and live a fulfilling life centered on helping others and serving his community. Dr Theo Hollander is a peacebuilding professional with over ten years of experience working with child soldiers, reintegration of combatants, transitional justice, and security. From 2011 to 2014, Theo was the research coordinator of a war documentation center based in Kitgum, northern Uganda where he documented hundreds of life stories of people affected by armed conflict. He currently lives and works in Myanmar as the Justice and Security adviser for the UK peacebuilding organization Saferworld.