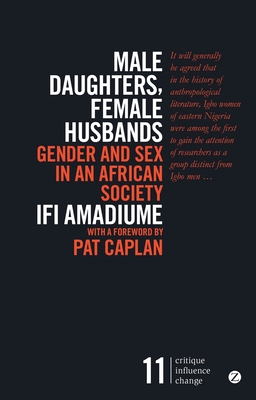 
Not On Our Shelves—Ships in 1-5 Days
In 1987, more than a decade before the dawn of queer theory, Ifi Amadiume published the groundbreaking Male Daughters, Female Husbands to critical acclaim. This compelling, enduring, and highly original book argues that gender, as constructed in Western feminist discourse, did not exist in Africa before the colonial imposition of a dichotomous understanding of sexual difference. Amadiume examines the African societal structures that enabled people to achieve power within fluid masculine and feminine roles.

At a time when gender and queer theory is viewed by many as overly focused on identity politics, this apt text not only warns against the danger of projecting Western notions of difference onto other cultures, but also questions the very concept of gender itself. Essential reading for anyone involved in gender studies or anthropology, this outstanding new edition of Male Daughters, Female Husbands will be invaluable for the next generation of researchers.
Ifi Amadiume is associate professor at Dartmouth College and an award-winning Nigerian poet, anthropologist, and essayist.
“Meticulously researched. . . . An extremely important contribution.”

“This is a text that should be read widely and includes women's studies, social sciences and history. It will surely be an important statement in the catalogue of anti-colonialist historiography.”

“Required reading in a cross-cultural women's studies course. . . . Well researched, clearly written, with a good bibliography, and efficiently produced. It can be depended upon to provoke lively discussion.”

“Essential reading for anyone interested in fundamental thinking about the issues of gender and sex in pre-colonial societies.”

“Ifi Amadiume, a Nigerian sociologist, has stepped out of the academic sidelines to tackle head on the issue of racist social anthropology.”

“Male Daughters, Female Husbands is a groundbreaking work in the study of gender in Africa. It presents a subtle, honest and clear portrait of gendered roles that upsets both the usual Western assumptions about how human societies can be organized and several propagandistic treatments of gender in Africa that have been published in the intervening years. This new edition of Amadiume's magnum opus deserves to be widely read.”

“Male Daughters and Female Husbands is a brilliant inspiration to open up gender theory to the originality of African philosophies of being, social life and power. Amadiume argues, from detailed evidence, that new potential emerges when we search past 'suppressed and fragmented information', to find Africa's own concepts and practices of matricentricity and genderlessness, and the social history of women's movements.”