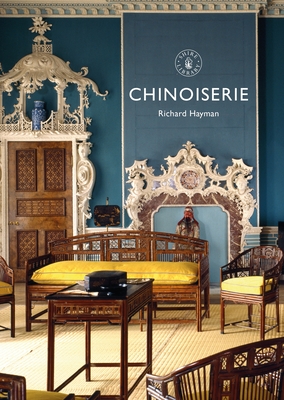 A beautifully illustrated introduction to the seventeenth-to-nineteenth-century mania for all things Chinese, from blue-and-white china tea sets to entire suites of Chinese-inspired rooms, including parts of the sumptuous Brighton Pavilion.

Chinoiserie is the taste for Chinese-inspired designs that were fashionable in Europe from the seventeenth to nineteenth centuries. British and other European designers adapted the visual culture of the Far East, reinterpreting what they perceived to be a mysterious, faraway place with little attempt at authenticity, creating a fantasy world of exotic birds, dragons, men in Chinese dress, and buildings with roofs with upturned eaves inspired by Chinese temples. Chinoiserie was produced in various forms -- in interior design (especially the fashionable 'Chinese rooms' with their wallpaper and lacquered furniture), in tea sets when tea drinking was in vogue, and in the pagodas and pavilions of eighteenth-century gardens.

Chinoiserie provides a beautifully illustrated introduction to this fascinating style of decorative art and explains how it evolved from direct contact between Western Europe and the Far East.

Richard Hayman is an archaeologist and architectural historian who writes on the history of the British landscape. His other books include Riddles in Stone: Myths, Archaeology and the Ancient Britons.

“With over 50 full-colour illustrations, this small book is a delightful and informative introduction to an interesting phenomenon.” —The Historian