Frames of War: When Is Life Grievable? (Radical Thinkers) (Paperback) 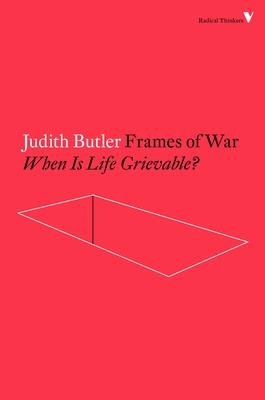 Frames of War: When Is Life Grievable? (Radical Thinkers) (Paperback)


Not On Our Shelves—Ships in 1-5 Days
In Frames of War, Judith Butler explores the media&rsquo;s portrayal of state violence, a process integral to the way in which the West wages modern war. This portrayal has saturated our understanding of human life, and has led to the exploitation and abandonment of whole peoples, who are cast as existential threats rather than as living populations in need of protection. These people are framed as already lost, to imprisonment, unemployment and starvation, and can easily be dismissed. In the twisted logic that rationalizes their deaths, the loss of such populations is deemed necessary to protect the lives of &lsquo;the living.&rsquo; This disparity, Butler argues, has profound implications for why and when we feel horror, outrage, guilt, loss and righteous indifference, both in the context of war and, increasingly, everyday life.

This book discerns the resistance to the frames of war in the context of the images from Abu Ghraib, the poetry from Guantanamo, recent European policy on immigration and Islam, and debates on normativity and non-violence. In this urgent response to ever more dominant methods of coercion, violence and racism, Butler calls for a re-conceptualization of the Left, one that brokers cultural difference and cultivates resistance to the illegitimate and arbitrary effects of state violence and its vicissitudes.
Judith Butler is Maxine Elliot Professor in the Departments of Rhetoric and Comparative Literature at the University of California, Berkeley. She is the author of Frames of War, Precarious Life, The Psychic Life of Power, Excitable Speech, Bodies that Matter, Gender Trouble, and with Slavoj Žižek and Ernesto Laclau, Contingency, Hegemony, Universality.
&ldquo;Judith Butler is the most creative and courageous social theorist writing today. Frames of War is an intellectual masterpiece that weds a new understanding of being, immersed in history, to a novel Left politics that focuses on State violence, war and resistance.&rdquo;—Cornel West