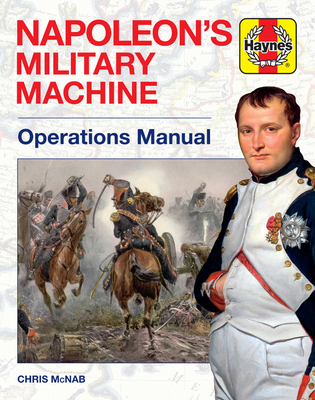 
Not On Our Shelves—Ships in 1-5 Days
The Grande Armee of Napoleon Bonaparte is widely acknowledged to be one of the greatest fighting forces ever deployed. With it the French scored a streak of historic victories that gave them an unprecedented grip on power over the European continent. At its peak it was made up of 680,000 men, a huge multi-national force of officers, infantry and cavalry, artillery and support services masterminded by a superior and highly flexible system of corps, divisions, brigades and regiments, commanded by officers in which Napoleon placed a huge degree of trust and autonomy to operate within the outlines of his strategic objectives. Looking closely at how this military machine was constructed and mobilized, Napoleon's Military Machine Operations Manual examines all aspects of the Grande Armee, from individual soldiers, what they wore, ate, slept in and were paid, to the chain of command, recruitment and training, intelligence and comms, and logistics and battle tactics. The legacy of Napoleon’s army is assessed, as is how his organization and management initiatives influenced national armies around the world in ways that can still be seen today.

Chris McNab specializes in military history and military technology. He has published more than 100 books, including the Haynes Kubelwagen/Schwimmwagen Manual, Roman Soldier Operations Manual, Dreadnought Battleship, Siege Warfare, Falklands War, and the RAF Chinook Manual. Chris has also written extensively for major encyclopedia series, magazines and newspapers, and has made TV appearances as an expert commentator for Discover, Sky and History channels.