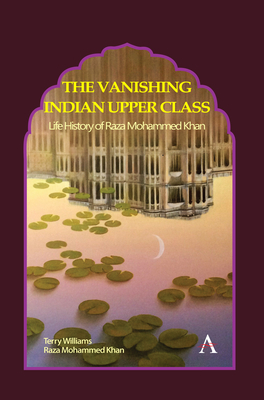 The Vanishing Indian Upper Class is a story necessary to the life, the times and the action as told and provides a basic narrative tension by what I refer to as an ethnographic excavation, because it begins to answer the basic question of how the story extend beyond the life history of one person. Sociologist Howard Becker considering the situation of the life history document in sociology stressed the "importance of presenting the actors subjective situation of the person's experiences and on "giving context in which he undergoes his social experiences." Becker recognized life history data as an important source for theory and a "means of testing concepts." In this way life history data seen as material offering basic evidence about social interaction and process because it "offers a vivid telling of what it means to be a certain kind of person."

This book concerns issues of gender, the role of women, inheritance, male privilege, ruling elites, marriage, the caste system, poverty, greed and familial betrayal.The idea of betrayal-one of the central tenets of the human condition-is much on display in this text. At the core of the book is a fundamental question: to what extent does the chicanery involving a family inheritance tell a much larger story about modern Indian culture from the perspective of an Indian Muslim and the nation as a whole.

The story is about the family of Raza Muhammad Khan and its legacy of honor, compassion, love, sacrifice, betrayal and dividing up land. This is an engaging family history intertwined with the story of one person's life and memories. As interlocutor I know a true-life history involves more than conversations and the material here provides other forms of personal documentations: letters, e-mails, photographs, illustrations, notes, poems, stories and accounts written by different family members, limited life histories, autobiographical accounts, and court records all as a source of knowledge. Oscar Lewis related similar sentiments when he wrote about The Sanchez Family in Mexico and sociologists William Thomas and Florian Znaniecki's did the same in The Polish Peasant in Europe and America.