Lessons from History: Hidden Heroes and Villains of the Past, and What We Can Learn from Them (Hardcover) 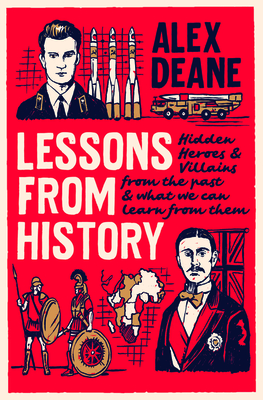 Lessons from History: Hidden Heroes and Villains of the Past, and What We Can Learn from Them (Hardcover)

Lessons from History is a joyful romp through the obscurest parts of the past. The annals have been scoured for overlooked figures and events that nonetheless made an impact, and within these pages they are brought hilariously and often poignantly back to life.

Alex Deane began tweeting about quirky tales as a distraction from the monotony of lockdown. Now with over 2 million views online, the #deanehistory stories are a social media sensation. These tongue-in-cheek tales about eccentricity and endeavour have been comprehensively reworked and expanded for this book - which also contains many new neglected stories from the past.

It will introduce you to figures as diverse as Louis-Napol on, Prince Imperial of France, who died fighting for the British Army in South Africa; Stanislav Petrov, who, sat in his control bunker in Moscow, fatefully ignored his faulty computer's advance warning of nuclear attack and thereby saved the world; James Barry, who, despite being born Margaret Ann Bulkley at a time when women were barred from university, became a highly skilled surgeon and the UK's first female-born doctor; and Dr Ameyo Adadevoh, the first person to raise the alarm about Ebola, who played a vital role in containing the disease and paid the price by losing her life.

The book also tells the story of obscure but remarkable events, such as the Aroostook War (also known as the Pork and Beans War), the Houlton Airlift, the Texel Rebellion and the Day of the Tiles. Readers will even be transported to the tiny Greek city state of Plataea in its heyday, before learning about its terrible fate.