Weirdest Maths: At the Frontiers of Reason (Paperback) 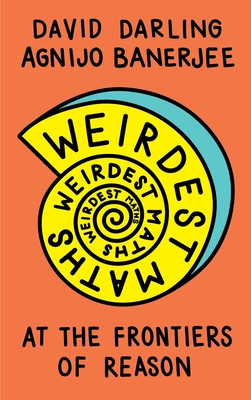 Weirdest Maths: At the Frontiers of Reason (Paperback)


On Our Shelves Now at:
Maths is everywhere, in everything. It’s in the finest margins of modern sport. It’s in the electrical pulses of our hearts and the flight of every bird. It is our key to secret messages, lost languages and perhaps even the shape of the universe of itself.

David Darling and Agnijo Banerjee reveal the mathematics at the farthest reaches of our world – from its role in the plots of novels to how animals employ numerical skills to survive. Along the way they explore what makes a genius, why a seemingly simple problem can confound the best and brightest for decades, and what might be the great discovery of the twenty-first century. As Bertrand Russell once said, ‘mathematics, rightly viewed, possesses not only truth, but supreme beauty’. Banerjee and Darling make sure we see it right again.
David Darling is a science writer, astronomer and tutor. He is the author of nearly fifty books, including the bestselling Equations of Eternity. He lives in Dundee, Scotland.

Together with Agnijo Banerjee, he is the co-author of the Weird Maths trilogy, and The Biggest Number in the World.

Agnijo Banerjee is one of the world’s most outstanding young mathematicians and a former student of David Darling’s. He was born in Kolkata, India, but has spent most of his life in Scotland. He is now continuing his studies at Trinity College, Cambridge.

Together with Darling, he is the co-author of the Weird Maths trilogy, and The Biggest Number in the World.
‘The brilliant combination of an accomplished science writer and a young mathematical prodigy.’
— Bobby Seagull, author of The Life-Changing Magic of Numbers and co-presenter of Monkman & Seagull’s Genius Guide to Britain