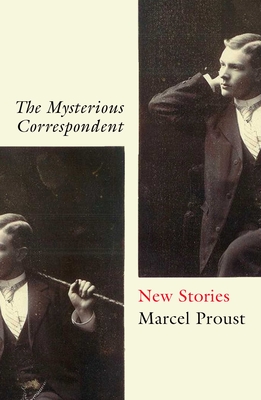 New writing from the literary master

Throughout Proust’s life, nine of his short stories remained unseen – the writer never even spoke of them. Perhaps he was not ready to share the early themes he was nurturing for his masterpiece, In Search of Lost Time. Or perhaps, in dealing directly with gay desire, they were too audacious – too near to life – for the censorious society of the time.

In these stories, published in English for the first time, we find an intimate portrait of a young author full of darkness, complexity and melancholy, longing to reveal himself to the world.
Marcel Proust (1871–1922) is a titan of twentieth century European literature. The stories that make up The Mysterious Correspondent were written when the author was still in his twenties. Having been discovered by the late Proust specialist Bernard de Fallois in the 1950s, they were held back from publication in France until 2019.

Charlotte Mandell is a French literary translator of over 40 books that include Gustave Flaubert, Guy de Maupassant, Honoré de Balzac, Mathias Énard and Jean-Luc Nancy.
‘Finely translated and startlingly audacious… Elements of [Proust’s] greatness are already in place: his ability to combine the qualities of the satirist and the moralist; his curiosity about the workings of the human heart. There is even the first glimpse of his lasting discovery – that art, thought and analysis can draw the thorn of suffering.’
— Literary Review

‘Revelatory… offers a lush and emotionally raw view into [Proust’s] evolution as a writer. The nine entries, annotated by footnotes, address topics such as love and suffering, homosexuality, and, of course, time lost and regained… The stories have plenty of scholarly appeal, but they are elegant on their own… Each tale features exquisite moments with expert annotations from Friasse. This volume is a fantastic discovery.’
— Publisher's Weekly, starred review

‘A hundred years after his Prix Goncourt, the author of In Search of Lost Time returns, stronger than ever!’
— Michel Schneider, Le Point

‘To think that this treasure might have remained hidden in the shadows of the archives…’
— Mohammed Aïssaoui, Le Figaro Littéraire

‘The dramatic birth of a writer destined for greatness.’
— Nelly Kaprièlian, Les Inrockuptibles

‘The stories are of considerable scholarly interest… at once revelatory and oddly familiar… intriguing.’
— Ian Thomson