In Times of War: Messages of Wisdom from Soldiers in the Afterlife (Paperback) 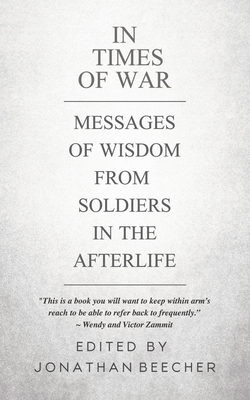 In Times of War: Messages of Wisdom from Soldiers in the Afterlife (Paperback)

In the first of a series of "White Crow Anthologies," In Times of War: Messages of Wisdom from Soldiers in the Afterlifedocuments conversations with soldiers who purport to have been near death or killed as a result of war. The communicators aren't mystics, sages or saints--just ordinary people who having passed on claim they haven't died at all and feel more alive than ever in their post-physical state.

From Plato's time 2,400 years ago to the Seven Years' War of the 1700s to World War I and II and Vietnam--the messages just keep on coming--all offering words of wisdom from those a little further along the path having crossed the great divide we call death.

Does what we believe now matter after physical death? Does our mental state here influence our post-death state? Do our thoughts and actions during life have consequences in the afterlife? These are big questions that at some point many of us ask ourselves particularly in the latter stages of life.

What is it like to die? Does forgiveness play a part in our spiritual evolution? Do heaven, purgatory and hell exist? The communicators offer opinions on these subjects and more.

This book may not have all the answers, but if the reader is asking any of these questions, it might help in some small way.