Eternity Revisited: Messages on Life from my Near-Death Experience (Paperback) 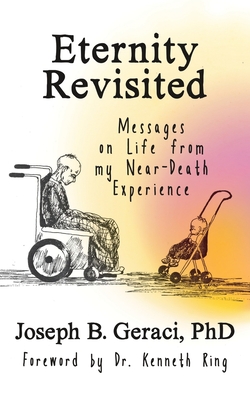 Eternity Revisited: Messages on Life from my Near-Death Experience (Paperback)

By Joseph B. Geraci

In the 21st century, with the advent of the internet, we now have access to thousands of accounts of near-death experiences across many cultures, from Plato's time more than 2,300 years ago to the present day.

In the near-death or clinically dead state, many report a euphoria of love that continues throughout their lives-their fear of death diminished or eliminated-their lives enriched forever.

Joe Geraci was a young man in his thirties, a former police officer and educator, when a hemorrhage came close to ending his physical life. What followed was physical agony and pain coupled with the bliss and joy of the eternal state.

In Eternity Revisited, the author captures the events leading up to his clinical death and the trauma, confusion and frustration that followed. Post-NDE, he recounts a life feeling immersed in love and perfection while living in an imperfect world-a dichotomy-a foot in two worlds. He expresses his feelings and wisdom through poetry, which NDE researcher, Kenneth Ring called, "Poems of exile, born when Joe died."

It's a memoir of tragedy, pain, wisdom, and hope.