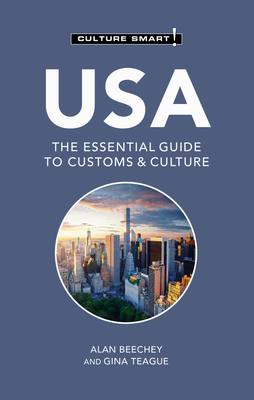 
Not Yet Published—Pre-Order Now
Have a more meaningful and successful time abroad through a better understanding of the local culture. Chapters on values, attitudes, customs, and daily life will help you make the most of your visit, while tips on etiquette and communication will help you navigate unfamiliar situations and avoid faux pas.

Who can afford not to understand the USA? Underneath the gleaming smile of American popular culture lies a rich and complex society that brims with contrasts and contradictions. It is a culture of rugged individualism, of go-getters, of high-tech high achievers. At the same time it is a deeply religious country with a quiet devotion to church and charitable works. This new edition of Culture Smart! USA reveals a society in transition. In an increasingly polarized political and cultural climate, and with an ever-widening gap between the haves and the have-nots, the rise of social media has given more Americans a voice. As Americans wake up to a changing world where their global economic dominance is no longer assured, attitudes and behaviors are being challenged and reassessed across the land. Culture Smart! USA takes you on a tour of the core influences and ideals that have shaped this great country and have driven the behavior and attitudes found on Main Street and in the workplace. It looks at Americans at work, at home, and at play, and provides the visitor with an up-to-date cultural road map of this dynamic, multifaceted society.
Alan Beechey gained an M.A. in Psychology at Oxford University before embarking on a career in business communications, which took him from his hometown of London to New York City. Since moving to America, he has worked for one of the world's largest banks, for two leading human resources consulting firms, and as an independent consultant. Today he is a dual citizen of the UK and USA, where his three sons were born, and is the author of the popular Oliver Swithin series of murder mysteries.

Gina Teague is a training facilitator, coach, and writer on individual, group, and organizational behavior with a particular focus on cross-cultural management and global career development. A native of the United Kingdom, she has lived and worked in France, Spain, Brazil, the US, and Australia. During her sixteen years living in New York, Gina gained an M.A. in Organizational Psychology and an EdM in Counseling Psychology from Columbia University, developed a successful intercultural consultancy, and produced two native New Yorker children. She now lives in Sydney, Australia.
“Culture Smart! has come to the rescue of hapless travellers,” —Sunday Times Travel


“…the perfect introduction to the weird, wonderful and downright odd quirks and customs of various countries,” —Global Travel


“…as useful as they are entertaining," —Easy Jet Magazine

"…offer glimpses into the psyche of a faraway world,” —​New York Times