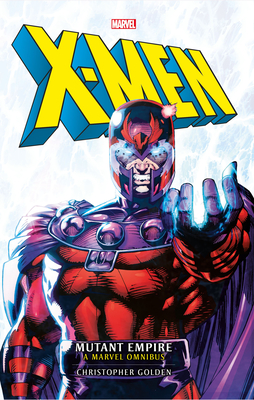 
Not On Our Shelves—Ships in 1-5 Days
Bringing the classic X-Men: Mutant Empire trilogy back into print in a brand-new omnibus.

They live as outcasts, hated and feared by the very humanity they protect. They are mutants, born with strange and wonderful powers that set them apart from the rest of the human race. Under the tutelage of Professor Charles Xavier, they are more than mutants. They are--the X-Men.

Magneto--the X-Men's oldest, deadliest foe--has taken over a top-secret government installation that houses the Sentinels, powerful mutant-hunting robots. The X-Men must fight to keep this deadly technology out of Magneto's hands and stop him from carrying out his grand plan: establishing a global Mutant Empire. The X-Men must join forces with old enemies to stop him--but in Magneto's brave new world, who can they trust?
CHRISTOPHER GOLDEN is the New York Times bestselling author of Alien: River of Pain, Snowblind, Ararat, Of Saints and Shadows, and many other novels. Winner of the Bram Stoker Award, he has been a finalist for the Stoker on multiple occasions, a three-time finalist for the Shirley Jackson Award, and a finalist for the British Fantasy Award. He is also a screenwriter, video game writer, workshop instructor, and chocolate enthusiast.