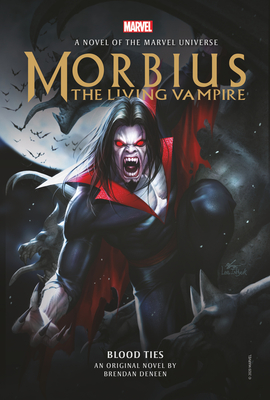 
Not On Our Shelves—Ships in 1-5 Days
Morbius the Living Vampire seeks to end his curse of a thirst for blood, and to stop a demonic cult from unleashing hell on Earth.

SEEKING TO CURE HIS RARE BLOOD DISORDER, DR. MICHAEL MORBIUS INSTEAD CURSED HIMSELF WITH AN INSATIABLE LUST FOR HUMAN BLOOD. HE HAS BECOME THE LIVING VAMPIRE.

While trying to cure his horrific condition, he has become allied with Amanda Saint, whose sister Catherine is one of the leaders of the Demon-Fire Cult. Also known as Poison-Lark, Catherine Saint has two goals above all else. She seeks to unleash all the powers of Hell on Earth, and to kill Morbius and Amanda.

Morbius and Amanda follow the cult’s trail to New York City, determined to stop Poison-Lark at any cost. But when they run afoul of an underground fight club that uses monsters as their pawns in the arena, Morbius becomes the star attraction, forced to kill or be killed…
BRENDAN DENEEN has authored the award-winning novel THE NINTH CIRCLE and the 2018 horror novel THE CHRYSALIS.  He's written Groot picture books for Marvel Press and the upcoming Green Arrow: Stranded original graphic novel for DC.  Other graphic novel work includes The Island of Misfit Toys, Solarman, Phoenix, and Scatterbrain.  His short stories and essays have been published by St. Martin's Press, Reader's Digest Books, 13Thirty Press, and Necro Publications. Deneen lives in New Jersey.