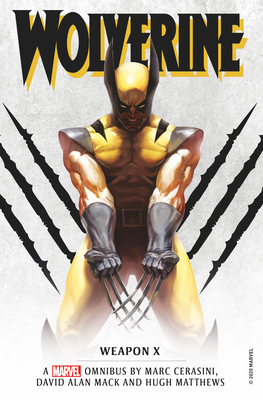 
Not On Our Shelves—Ships in 1-5 Days
Collecting three classic fan-favorite Wolverine novels together for the first time in a brand-new omnibus edition, including origin story Weapon X.

Before joining the X-Men, Wolverine was simply a directionless loner mutant named Logan. This is the cruel origin of Logan's transformation into Wolverine, as seen through the eyes of his tormentors. Their goal is to create the ultimate weapon, an indestructible man. As Logan manages to free himself from his captors, a brutal wave of violence affects all those involved.

Wolverine is tapped by a government agency to investigate rumors of a miracle cure developed by a sinister underworld organization, and used to gain leverage and control over desperate African nations. Wolverine must thwart the criminals' schemes and recover the panacea for benign use. But hope may turn to ashes as Logan learns that nothing is quite as it seems.

Wolverine's memories of fighting in the Canadian army during World War II begin to resurface. Digging deeper, he discovers he was a prisoner of war, at the will of a ruthless Nazi scientist determined to unlock the secrets of Logan's mutant healing powers. What Logan doesn't know is that the scientist is still at large, and he'll stop at nothing to finish what he started sixty years earlier...
Marc Cerasini has spent time on the New York Times and USA Today bestseller's lists. His writing spans from children's picture books and young adult novels to adult mystery and military nonfiction. Along the way, he's managed to ghostwrite for Tom Clancy.

Hugh Matthews is the pseudonym of SFF writer Matthew Hughes who won the Crime Writers of Canada's Arthur Ellis Award, and has been shortlisted for the Aurora, Nebula, Philip K. Dick, Endeavour, A.E. Van Vogt, and Derringer Awards.

‘Strong stories and worth the read’ - Cinema Sentries