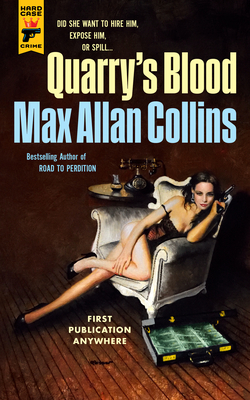 
On Our Shelves Now at:
The hitman hero of the acclaimed series Quarry on Cinemax returns for his final act. By Quarry’s creator, the award-winning author of Road to Perdition!

QUARRY'S VIOLENT PAST COMES LOOKING FOR HIM

The professional hitman known as Quarry -- star of the Cinemax TV miniseries of the same name -- has put killing behind him. But after a beautiful writer of true-crime bestsellers drops by to announce he's the subject of her next book, killers descend to give him some of his own deadly medicine, forcing Quarry to journey into his bloody past to find the answers -- and settle old scores.

QUARRY’S BLOOD brings the hitman’s decades-long saga right up to the present day as MWA Grand Master Max Allan Collins explores the startling final act of Quarry’s professional career.
Max Allan Collins was hailed in 2004 by Publisher's Weekly as "a new breed of writer." A frequent Mystery Writers of America nominee in both fiction and non-fiction categories, he has earned an unprecedented eighteen Private Eye Writers of America nominations, winning for his Nathan Heller novels, True Detective (1983) and Stolen Away (1991). In 2002, his graphic novel Road to Perdition was adapted into an Academy-Award winning film, starring Tom Hanks, Paul Newman, Jude Law and Daniel Craig. He lives in Iowa, USA.
“[Quarry] still operates at a more ruthless clip than almost anyone he encounters. This is a sure-footed ending to a series that marinated in the excesses of pure pulp.”—New York Times

"Any fan of paperback-spinner noir, with plenty of blood spatter seasoned with a little interpersonal complexity, will have no trouble getting acclimated." - Booklist

"A gripping fast-paced epilogue and so much fun ... This is one of the best Quarry books ever." - Pulp Fiction Review

"A nostalgia fix and incredibly fresh and up-to-date, catching up with Quarry pushing 70 in a post-COVID existence ...a serving of more of that gritty tone and realism Collins fans will be accustomed to reading, with doses of violence and sleaze and sex typical of the series." - Borg