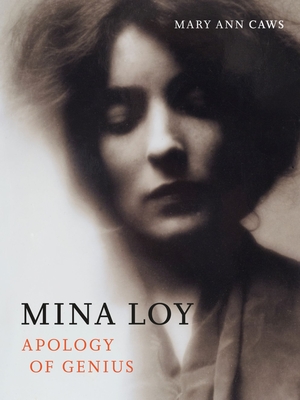 
In Stock—Click for Locations
Featuring many rare images, an enlightening exploration of the life and work of avant-garde multihyphenate Mina Loy.

Mina Loy was born in London in 1882, became American, and lived variously in New York, Europe, and finally, Aspen until she died in 1966. Flamboyant and unapologetically avant-garde, she was a poet, painter, novelist, essayist, manifesto-writer, actress, and dress and lampshade designer. Her life involved an impossible abundance of artistic friends, performance, and spectacular adventures in the worlds of Futurism, Christian Science, feminism, fashion, and everything modern and modernist.

This new account by Mary Ann Caws explores Mina Loy’s exceptional life and features many rare images of Mina Loy and her husband, the Swiss writer, poet, artist, boxer, and provocateur Arthur Cravan—who disappeared without a trace in 1918.
Mary Ann Caws is distinguished professor emerita of comparative literature, English, and French in the Graduate School of the City University of New York. She is the author of many books.
"Much like its subject, Mina Loy: Apology of Genius runs on restlessness, fervor, and open-endedness. With it, Caws has gifted us yet another stirring assemblage that teaches and excites, this time blessedly dilating on a singularly complex, singularly wild figure at the heart of the modern and so much else."
— Maggie Nelson, author of "The Argonauts"

"Like Caws’s other critical studies, her Mina Loy is startlingly original, personal, and wonderfully refreshing in its candor. Beautifully and copiously illustrated, this bio-critical overview gives us a genuinely new perspective on the exciting poetry, critical prose, and artworks of this great avant-garde artist. Loy’s central role in both the Futurist and Dada movements has never before been so persuasively argued. A real page-turner!"
— Marjorie Perloff, author of "Infrathin: An Experiment in Micropoetics"

“Reading Caws’s book today reminds me of the excitement I felt when I first encountered Mina Loy’s writing nearly fifty years ago. Mina Loy is not for everyone, I wrote at the time. She is an acquired habit. But if she gets into your system, you may become addicted. In fact you may not ever get over her, in which case this charismatic book will not help you. It will only make withdrawal more difficult.”
— Roger Conover, writer, editor, and Mina Loy's literary executor