The World of All Creatures Great & Small: Welcome to Skeldale House (Hardcover) 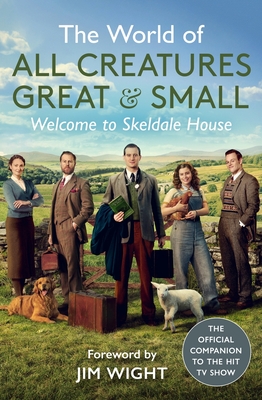 The World of All Creatures Great & Small: Welcome to Skeldale House (Hardcover)

By All Creatures Great & Small, Jim Wight (Foreword by)

Welcome to the wonderful world of Skeldale House: the veterinary hospital for the locals of Darrowby village and their animals.
In this exclusive behind-the-scenes book, go through the doors of the famous 1930s practice and discover the real-life inspirations for the TV remake of All Creatures Great & Small.

Offering exclusive insight into the making of the show, and paying homage to its impressive heritage, including Herriot’s bestselling memoirs and the long-running series, but also to the incredible backdrop of the Yorkshire countryside, this book is the ultimate celebration of a cast of characters – human and animal – who have been bringing us joy for over fifty years.

Along with exclusive interviews with the actors Nicholas Ralph, Samuel West, Rachel Shenton, Callum Woodhouse and Anna Madeley, you will get to know everyone from the vet advisor, the animal trainers and the animals themselves, to the director Brian Percival, the make-up stylists and the production team. Learn about their adventures on- and off-screen as they went about evoking the authentic experience of the house, the practice and its unforgettable setting.

Perfect for:
• Fans of the show as well as other British period pieces such as Downton Abbey
• Animal and nature lovers
• Anyone who loves a behind-the-scenes look at popular series

All Creatures Great & Small is a Playground Production for Channel 5, in association with All3Media and Screen Yorkshire. The classic veterinary drama, based on James Herriot's adventures in 1930s Yorkshire, is directed by Brian Percival (Downton Abbey) and stars Nicholas Ralph, Samuel West and Anna Madeley. The first series was nominated for Best Drama Series by the Broadcasting Press Guild Awards.

"Like gripping a warm cup of tea and settling inside a very cozy, extremely British snow globe." —Variety

"All the farm wisdom and charm one could want." —New York Times

"Just what the doctor ordered." —Vogue