Ruins of the Palace of Emperor Diocletian: The Ancient Roman Palace at Spalatro in Dalmatia - Modern-day Split, Croatia - Illustrated in the 1760s (Hardcover) 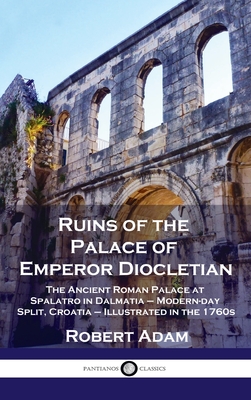 Ruins of the Palace of Emperor Diocletian: The Ancient Roman Palace at Spalatro in Dalmatia - Modern-day Split, Croatia - Illustrated in the 1760s (Hardcover)

Emperor Diocletian's palace is a historic marvel - this book and its sketches, published by architect Robert Adam in the 1760s, aided the rediscovery of this Ancient Roman treasure.

Illustrative of late-Roman architecture, Diocletian's palace was comprised of a military garrison; two temples; flower and vegetable gardens; servant, guest, dining and living quarters; large storage cellars and various outbuildings. A sprawling structure, the palace was the center of a small port town - its coastal location in Croatia was secluded but at close enough proximity to Rome for the Emperor to receive visitors or arrange his own travel.

More than seventy drawings reconstruct in amazing detail the palace. Robert Adam was an accomplished architect of King George III of England; his sketches strive to show both the ruined state of the buildings, together with reconstructions of how these appeared in ancient times. On several occasions, Adam expresses his awe at the skills and ingenuity of the Emperor's architects, their designs and materials are demonstrated to be exquisite yet durable.

Today, Diocletian's palace is the central attraction of the town of Split in Croatia. The entire complex totals around 30,000 square meters, and is a popular destination for visitors.