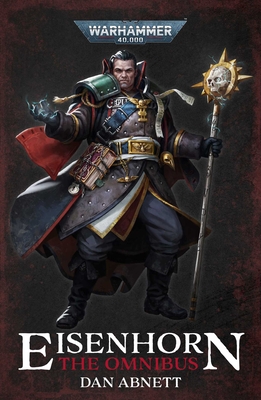 
Backordered
Discover one of the most well known Black Library characters, Gregor Eisenhorn, in this great value omnibus.

In the grim far future, the Inquisition moves amongst mankind like an avenging shadow, striking down daemons, aliens and heretics with uncompromising ruthlessness. Written by Gaunt’s Ghosts creator, Dan Abnett, this volume charts the career of Inquisitor Gregor Eisenhorn as he changes from being a zealous upholder of the truth to collaborating with the very powers he once swore to destroy. Part detective story, part interplanetary Epic, this omnibus brings together the novels Xenos, Malleus, Hereticus and The Magos, as well as four short stories.
Dan Abnett has written over fifty novels, including Anarch, the latest instalment in the acclaimed Gaunt’s Ghosts series. He has also written the Ravenor and Eisenhorn books, the most recent of which is The Magos. For the Horus Heresy, he is the author of Horus Rising, Legion, The Unremembered Empire, Know No Fear and Prospero Burns, the last two of which were both New York Times bestsellers. He also scripted Macragge’s Honour, the first Horus Heresy graphic novel, as well as numerous Black Library audio dramas. Many of his short stories have been collected into the volume Lord of the Dark Millennium. He lives and works in Maidstone, Kent.