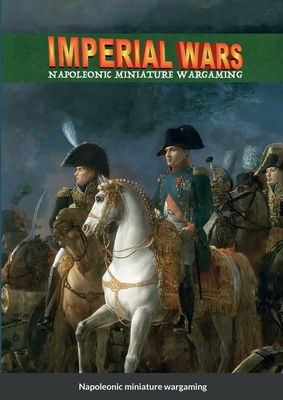 
Not On Our Shelves—Ships in 1-5 Days
(This book cannot be returned.)
A wargame is a game that simulates war, as opposed to abstract games such as chess, it seeks to explore many tactical and strategic aspects in a more realistic way. The wargame can be played for recreation, to train military officers in the art of strategic thinking, or to study the nature of potential conflicts. Many wargames recreate specific historical battles, others, plausible clashes, and still others, completely invented conflicts. Miniature wargaming is a form of gaming in which the battlefield is represented by scale models of terrain and the units on the field are represented by toy soldiers, most often nicely painted according to careful historical research. The recreational aspect of the game is combined with the collecting and aesthetic aspect of modelling. The system of rules for the Napoleonic era that we propose in this book is for players who have a minimum of knowledge of three-dimensional wargames and omits the explanation, where possible, of the origins or technical aspects of the game, limiting itself to an exposition of the rules. The idea is to have a rules system that is easy to play, where the strategic element is essential and the use of tables and research in the manual during the game is kept to a minimum.