Six California Kitchens: A Collection of Recipes, Stories, and Cooking Lessons from a Pioneer of California Cuisine (Hardcover) 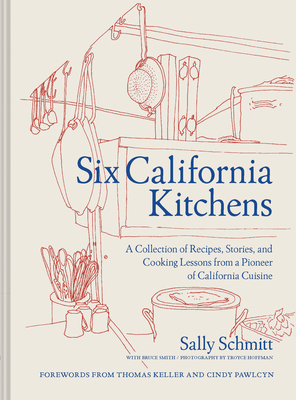 Six California Kitchens: A Collection of Recipes, Stories, and Cooking Lessons from a Pioneer of California Cuisine (Hardcover)


On Our Shelves Now at:
Six California Kitchens is the quintessential California cookbook, with farm-to-table recipes and stories from Sally Schmitt, the pioneering female chef and original founder of the French Laundry.

Sally Schmitt opened The French Laundry in Yountville in 1978 and designed her menus around local, seasonal ingredients—a novel concept at the time.

In this soon-to-be-classic cookbook, Sally Schmitt takes us through the six kitchens where she learned to cook, honed her skills, and spent her working life. Six California Kitchens weaves her remarkable story with 115 recipes that distill the ethos of Northern California cooking into simple, delicious dishes, plus evocative imagery, historic ephemera, and cooking wisdom.

With gorgeous food and sense-of-place photography, this is a masterful, story-rich cookbook for home and aspiring chefs who cook locally and seasonally, food historians, fans of wine country, and anyone who wants to bring the spirit of Northern California home with them.

CALIFORNIA CONNECTION: This is a California cookbook from a native Californian chef, who founded one of the most well-known and revered restaurants in California (and in the world). The book was written, photographed, and designed by members of Sally's family.

PERSON OF NOTE: Sally Schmitt is the great unsung hero of California cuisine, a pioneer of the farm-to-table movement, and original founder of the French Laundry restaurant in Napa Valley. This book celebrates a respected, reputable chef and shares a collection of her best recipes from a lifetime of cooking.

COMPELLING PACKAGE: This book is full of evocative images of Napa Valley, rustic kitchens, and the rugged California coastline. With lifestyle photography that offers a peek into the history of Northern California and its food revolution, this book will appeal to readers with its lovely design and package—but they'll stay for the inspiring story and approachable recipes.

• Home cooks who cook locally and seasonally, who live in California, or who enjoy California cuisine
• Foodies who collect regional cookbooks rich with history and visuals
• People who bought Twelve Recipes, Zuni, and Gjelina
• Fans of the French Laundry and Alice Waters
Sally Schmitt was the original founder of the French Laundry and one of California's most influential food pioneers. She was born and raised in Northern California and started cooking professionally in 1967. After 11 years spent in Yountville running a café and a restaurant, she opened the French Laundry with her husband, Don. She designed her menus around local, seasonal ingredients—a novel concept at the time. This style of "locavore" cooking caught the attention of critics and inspired other local chefs, helping propagate the farm-to-table movement. After selling the restaurant in 1994, Sally taught cooking classes in a renovated farmhouse on an apple farm in Mendocino. She passed away in 2022.
“Schmitt’s memoir and cookbook […] was 10 years in the making. Sadly, she did not live to see the fruits of this particular labor: Schmitt died on March 5, just five days after her 90th birthday and a month before the book’s publication. But her forthright, unpretentious presence is very much alive in this beautiful volume filled with food, family, reminiscences, recipes and no-nonsense cooking tips.”-The Wall Street Journal

"Schmitt, the founder of California’s famed French Laundry restaurant, reflects on the food that defined her life, in this sumptuous collection of recipes and tales from the kitchens that inspired them. [...] Fans of Alice Waters won’t want to miss this delectable page-turner."-Publishers Weekly, starred review