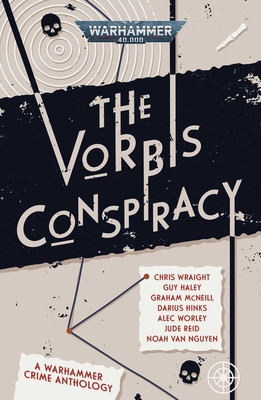 
Not On Our Shelves—Ships in 1-5 Days
Fantastic Warhammer Crime anthology set in the sprawling metropolis of Varangantua!

Baggit is the fast-talking ratling with an eye for the big score. Clodde is the ogryn with a heart of gold and a head full of dreams. These abhuman deserters turned criminals operating in the city of Varangantua have crossed the wrong man for the last time, and now they’re on the run…
At least, that is, until Baggit learns of a score that could pay their debts and save their skins – the Wraithbone Phoenix, a fabled treasure rumoured to be hidden aboard a voidship recently scheduled for decommission. But Baggit and Clodde aren’t the only ones with eyes on the prize. When word gets out, every thief in the Dredge is going to be gunning for the Phoenix. Does Baggit have the cunning to find the treasure and get out alive, or will someone finally cash in the bounty on his head?

Jude Reid lives in Glasgow with her husband and two daughters, and writes in the narrow gaps between full-time work as a surgeon, wrangling her kids and failing to tire out a border collie. In what little free time she has, she enjoys tabletop roleplaying, ITF Tae Kwon Do and inadvisably climbing big hills.

Alec Worley is a well-known comics and science fiction and fantasy author, with numerous publications to his name. He is an avid fan of Warhammer 40,000 and has written many short stories for Black Library including ‘Stormseeker’, ‘Whispers’ and ‘Repentia’. He has recently forayed into Black Library Horror with the audio drama Perdition's Flame and his novella The Nothings, featured in the anthology Maledictions. He lives and works in London.

Chris Wraight is the author of the Horus Heresy novels Warhawk, Scars and The Path of Heaven, the Primarchs novels Leman Russ: The Great Wolf and Jaghatai Khan: Warhawk of Chogoris, the novellas Brotherhood of the Storm, Wolf King and Valdor: Birth of the Imperium, and the audio drama The Sigillite. For Warhammer 40,000 he has written The Helwinter Gate, The Lords of Silence, Vaults of Terra: The Carrion Throne, Vaults of Terra: The Hollow Mountain, Watchers of the Throne: The Emperor’s Legion, Watchers of the Throne: The Regent’s Shadow and many more. Additionally, he has many Warhammer novels to his name, and the Warhammer Crime novel Bloodlines. Chris lives and works in Bradford-on-Avon, in south-west England.