At the Burning Abyss: Experiencing the Georg Trakl Poem (The Seagull Library of German Literature) (Paperback) 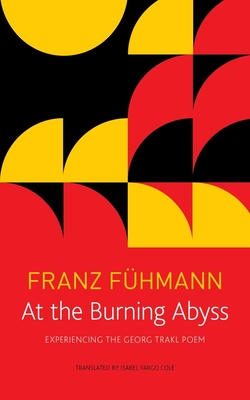 At the Burning Abyss: Experiencing the Georg Trakl Poem (The Seagull Library of German Literature) (Paperback)


Not On Our Shelves—Ships in 1-5 Days
Franz Fühmann’s magnum opus.

At the Burning Abyss is a gripping and profoundly personal encounter with the great expressionist poet Georg Trakl. It is a taking stock of two troubled lives, a turbulent century, and the liberating power of poetry.

Picking up where his last book, The Jew Car, left off, Fühmann probes his own susceptibility to ideology’s seductions—Nazism, then socialism—and examines their antidote, the goad of Trakl’s enigmatic verses. He confronts Trakl’s “unlivable life,” as his poetry transcends the panaceas of black-and-white ideology, ultimately bringing a painful, necessary understanding of “the whole human being: in victories and triumphs as in distress and defeat, in temptation and obsession, in splendor and in ordure.”

In 1982, the German edition of At the Burning Abyss won the West German Scholl Siblings Prize, celebrating its “courage to resist inhumanity.” At a time of political extremism and polarization, has lost none of its urgency.
Franz Fühmann (1922-84) is one of modern Germany’s most fascinating literary figures, and the author of dozens of novels, short stories, essays, poems, ballets, and children’s books.

Isabel Fargo Cole is a US-born, Berlin-based writer and translator. She is the initiator and coeditor of No Man's Land, an online magazine for new German literature in English.