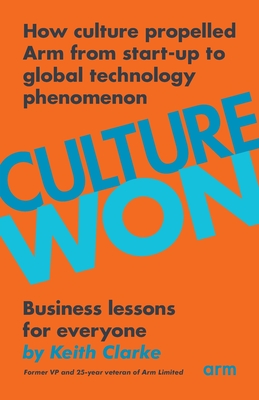 This book is about the company culture that helped drive Arm Limited's spectacular growth to become the world's leading semiconductor Intellectual Property (IP) company. Its extremely power-efficient processor technology has been licensed to hundreds of semiconductor chip manufacturers and Original Equipment Manufacturers (OEMs). Arm is still largely unknown to the broader public, yet Arm's technology is nearly ubiquitous and has been a foundational building block of the global rise of the smartphone. Arm-based microprocessors power over 95% of the world's mobile phones.

However, this book is not about technology. It's about how a company grew from being a small start-up in Cambridge, UK with 12 people and a 1.75m cash investment to a global organization with over 5,000 employees in over 50 countries and more than $1.5bn revenue in 2016 when SoftBank acquired it for $32bn. Arm Limited was founded as Advanced RISC Machines in November 1990, a joint venture between a British computer manufacturer, Acorn Computers Limited and its much larger US competitor, Apple Computers Inc. The purpose of the new venture was to develop and proliferate the uniquely power-efficient and high-performance RISC-based microprocessor technology that had been developed several years earlier by Acorn.

Using first-hand interviews with founders and the author's knowledge, this book charts some of the key people involved in the birth of the technology and the company Advanced RISC Machines. It considers how their behaviors and decisions led to the creation of the licensing business model and the strategy that underpinned Arm's later success. This book reveals some of the layers that help explain how the combination of culture, strategy and execution built the world's leading semiconductor IP company. It provides insight into ten essential ingredients of Arm's success, including the company's unique proposition, how the early business model and strategy were formed, the creation and evolution of the winning culture, the ecosystem of shared success and how Arm stayed unified throughout a period of extraordinary growth.

The purpose of the book is to help readers create a culture of inclusiveness, collaboration and innovation within their own organizations. The book provides examples from Arm's history which should provide inspiration and guidance for making the necessary changes to enable a winning culture.

Additional details of interest to history lovers include the stories behind the BBC Microcomputer prototype, the Acorn RISC Machine microprocessor development, Advanced RISC Machines' creation, the partnership-focused licensing business model's development, the nearly lost design-win at Nokia for their new GSM mobile, the 20+ billion selling Cortex(R)-M product that almost didn't happen and the battle for smartphones and tablets with Intel.