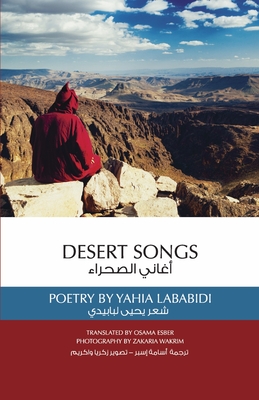 
Not On Our Shelves—Ships in 1-5 Days
Lababidi seems to have something other, and otherworldly, in mind. The poet crafts a mythic Egypt... a land abundant with connotation, fertile with image and nuance. Its mountains are an "imperishable memory of the desert/craniums exposed, crumbling horribly" and a "school of inscrutable sphinxes/master storytellers sworn to secrecy." The desert "is a cemetery/picking its teeth with bones."

Words are an imperfect tool with which the poet tries to reflect a spirit that is the poem's true subject... Perhaps he will approach more closely the unreachable goal of mining the spirit that, in his view, masses beneath the surface of what a poet can directly observe or his words precisely describe.
?Patrick Meighan, author, editor and professor.

A transnational mysticism emerges out of Lababidi's poetry. In his verses, one finds echoes of Rumi, Catholic imagery... Conduits for an eternally seeking faith are found in his reflections, on the sacred wings of the night, and in the tug on a rosary bead. The poet reminds us that something immense, loving, and enveloping exists just beyond our visible reality. Readers of varying languages and cultures are nudged to recognize our collective spiritual reality, and that the path to grace lies through a multitude of rituals and artifacts.

Through his poetic medium, Lababidi goes into the desert of his solitude to bring consoling insights back from the enveloping, loving water-world. As readers, we are reminded to reflect on our own memories and dreams. We are prompted to remember our watery depths of spirit, love, and memory that gird the fleeting structures of this visible world.
?Layla Azmi Goushey, professor, author and editor.

Egyptian-born Lababidi is steeped in the traditions of Western philosophy but comes from a world where the desert reminds you constantly that you are surrounded by a vast inimical emptiness; the ancient Christian hermits used to sit in the Egyptian desert because from there you could place a toll-free call to Paradise.

Although it may seem contradictory to say so, the mystic is a person in conversation; everything in him burns toward that conversation.
?Douglas Glover, award-winning Canadian writer.
Yahia Lababidi is an Egyptian author of ten books who has been called "our greatest living aphorist." His prose and poetry meditations have gone viral, are used in classrooms and religious services, and feature in international film festivals.
Lababidi's latest work includes "Revolutions of the Heart" (Wipf and Stock, 2020), a collection of essays and conversations exploring crises and transformation, and "Learning to Pray" (Kelsay Books, 2021), a book of new and selected spiritual aphorisms and poems. Osama Esber is a Syrian poet, photographer and translator based in the United States of America. He recently published two poetry collections by Dar5otot Publishing House in Amman, Jordan; the first is entitled "On my Sea Routes" (2020) and the second, "On the Bank of the River of Things" (2021). He has translated many books from English into Arabic for a selection of Western poets, writers and thinkers. Esber is also co-editor of the Arabic section of Jadaliyya and co-host of the monthly audio podcast Status, which combines hard-hitting interviews/conversations, on-the-scene reports, reviews, informed commentary, and readings on the Arab world and the Middle East. Zakaria Wakrim was born in 1988 and currently lives and works between Spain and Morocco. "The aim of photographs is to impart a deep and fundamental understanding of the desert's ability to spur the type of introspection and enlightenment that writers like Saint-Exupéry wrote about with such passion." (zakariawakrim.com)
Photographs in this chapbook are from Wakrim's "Amarg" series, the Amazigh (Berber) word for nostalgia, also used to signify a hybrid form of musical poetry found in Southern Morocco.