Fletcher and the Flying Machine (Paperback) 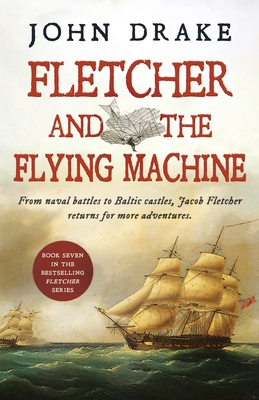 Fletcher and the Flying Machine (Paperback)

After many successful years at sea, Jacob Fletcher is finally pursuing his career in trade. Through his new acquaintance, Sir David Bayley, and his grandson, Arthur, Fletcher becomes fascinated by a new form of aerial navigation.

It isn't long, however, before he is persuaded back to the sea on a new commission, given promotion to commodore, and sent to protect Ireland from the French. Thus naval battles, Irish uprisings and rebellion, and unscrupulous methods lead to Fletcher questioning his own morals - and reckless actions could be costly

His adventures take an even more dangerous turn as he is forced into the Baltic on a rescue mission. Despite warnings from friends, and with dangerous enemies in high places, Fletcher attempts to complete a mission where others have failed. Now he must use all his knowledge, improvisation, and the skills of his newest midshipman, to survive.

From naval battles to Baltic castles, this seventh book in the Fletcher series is filled with adventure and humour.

'Broad comedy, high drama, plenty of action, a pinch of sex... the genre has room for this cheerily debunking outsider' - Daily Mail

'Swashbuckling adventure on the high seas doesn't get much better than this ... John Drake writes beautifully, and you'll be torn between savoring the words and quickly flipping the pages. Any favorable comparison to Stevenson or Patrick O'Brian is totally justified' - Nelson DeMille, #1 New York Times bestselling author

John Drake trained as a biochemist to post-doctorate research level before realising he was no good at science. His working career was in the television department of ICI until 1999 when he became a full-time writer. John's hobby is muzzle-loading shooting, and his interests are British history and British politics (as a spectator), plus newspapers, TV news, and current affairs. He is married with a son and two grandchildren.