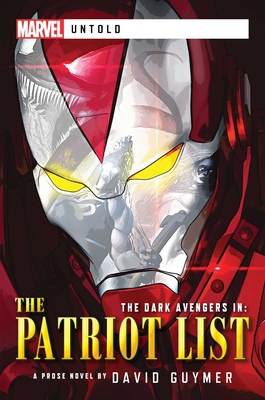 
Not On Our Shelves—Ships in 1-5 Days
S.H.I.E.L.D. is gone, the Avengers have fallen. All that stands in defence of the world are its greatest villains, the Dark Avengers, in this high-octane adventure from the Marvel Untold line

Under Norman Osborn’s jurisdiction, the Avengers have been secretly re-formed with a cabal of deadly super villains. This is Osborn’s chance to finally put the Green Goblin behind him and become the Iron Patriot the world needs him to be. But villains aren’t easy to wrangle into the place of heroes – doing damage control for his new line-up constantly puts his empire at risk. When S.H.I.E.L.D. loyalists break into Avengers Tower and steal the secret list of replacements for his team of maniacs, the threat to his reign becomes intolerable.  Osborn unleashes the worst of the worst to crush those responsible… It’s hard to be a hero!
DAVID GUYMER is a scientist and writer from England. His work includes many novels in the New York Times-bestselling Warhammer and Warhammer 40,000 universes, notably Headtaker and Gotrek & Felix: Slayer, and the bestselling audio drama Realmslayer. He has also contributed to fantastical worlds in video games, tabletop RPGs, and board games.
"I gave The Patriot List five stars. I would definitely read more volumes from this author featuring these characters. Even without any of the better-known heroes of the Marvel Universe involved, it was still a very enjoyable read."
— Chris L. Owens

"I found myself actually cheering for the bad guys. Yes, S.H.I.E.L.D has always been questionable, but Guymer makes the villains so likeable that you really do want to see them succeed. Really reinforcing the fun, you can have being the bad guy."
— What You Tolkien About

"This is absolutely one of the greatest uses of a license ever. This book reads like what all tie-ins should: a lost arc... This is in every word a Dark Avengers story. This is the absolute dream this column exists for. That it’s fleshing out a series I thought needed more is the best part."
— The Omniplex

"Dark Avengers, The Patriot List is an action packed, dark, and wonderfully fun book that takes readers back to a unique time in the Marvel universe."
— Trans-Scribe

"The story is fast-paced, full of action and mayhem as well as characters struggling with their own inner demons."
— Martin's View