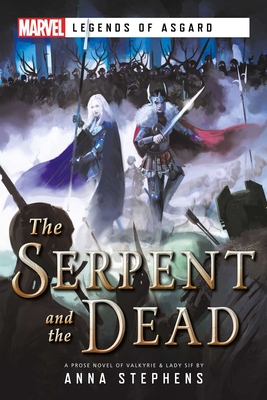 
Not On Our Shelves—Ships in 1-5 Days
An extraordinary duo of Asgardian Heroines battle across the Ten Realms, in this epic fantasy adventure set in Marvel’s Legends of Asgard

In the midst of a bloody conflict, Lady Sif, the valiant Asgardian warrior, watches her close friend die in glorious battle – but her soul is not taken to the eternal halls of Valhalla. Furious and petrified that the afterlife for her and all Asgardians is in peril, she enlists the aid of Brunnhilde the Valkyrie, the fearsome warrior entrusted with conveying worthy souls to the heroes’ afterlife. Together they scour Asgard for answers. Rumors abound of towns being attacked by a horde of soldiers who cannot be killed. Someone is building an immortal army and stealing Asgardian souls… A worthy challenge for two of Asgard’s mightiest champions!
Anna Stephens is the acclaimed British author of the Godblind Trilogy – an epic fantasy series somewhere on the grimdark scale, as well as a selection of novellas and short fiction. She has a second Dan black belt in Shotokan Karate and trains in sword fighting.
“Builds to an epic crescendo… deeply emotional and unexpectedly hopeful.”
— Publishers Weekly, starred review

“Writes her name in blood on the roster of masters of grimdark alongside the likes of Mark Lawrence and Joe Abercrombie.”
— B&N Sci-Fi & Fantasy Blog

"Anna Stephens, an acclaimed British fantasy author, seems right at home with the rich mythology of Asgard and the choreographing of combat sequences throughout the book. She delivers an engaging adventure that shines a spotlight on one of Marvel's lesser known heroines."
— Martin's View

"I had so much fun with this book, and it really ticked all the boxes for me – action and emotion, fast-paced and gripping, but still taking those essential moments just for the characters."
— Beneath a Thousand Skies

"There were many exciting action sequences in this fast-paced novel with plenty of well-choreographed fight scenes."
— Sue's Musings