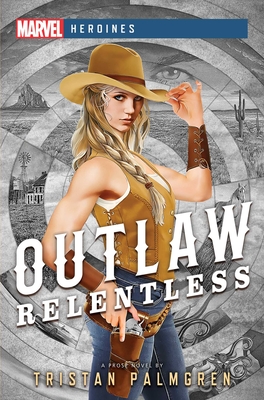 
Not On Our Shelves—Ships in 1-5 Days
Super-powered mercenary Outlaw is always ready for a fight, but when her own mind is being stolen from her, she’ll have to find a new way to defeat the bad guys, in this fast-paced Marvel Heroines adventure.

Inez Temple, aka Outlaw, is a key member of Domino’s mercenary team, the Posse, but when a job goes sideways Outlaw finds herself on the outside, and in an alarming state. A merc in her line of work needs to be sharp, but Inez’s mind is slipping away from her. Mutant-hating telepath Johnny Dee is robbing her of the only things she’s ever counted on: her wits and her courage, and worse – her very identity. Inez’s bloody revenge will take her on a chase through the Texas desert and a labyrinth of her own worst memories.
TRISTAN PALMGREN is a Missouri, US-based author and computer game writer, known for the critically acclaimed genre-warping novels that blend historical fiction and space opera, Quietus and its sequel Terminus.
"Solid characterization made the book enjoyable to read. Fans of solid super-hero action will find this story interesting."
— Martin's View

"Outlaw: Relentless is a surprisingly emotional story about changing identities, healing from trauma, and what makes a life worth living."
— But Why Tho

"Tristan Palmgren is fantastic. Their characterization is amazing! If you don’t end up loving Outlaw by the first few pages, I don’t know what is wrong with you!"
— What You Tolkien About

"I didn't expect it to end up being an intense action story full of desperate fights, extreme survival, and a ton of character drama that would not only lead to me finishing the book in a single day, but also with Outlaw ending up on my list of favourite characters."
— Trans-Scribe