The Starmer Project: A Journey to the Right (Paperback) 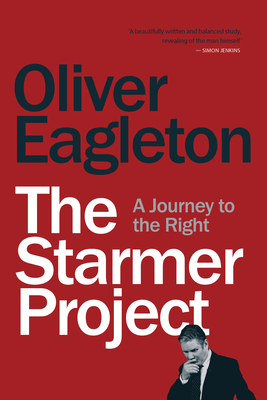 The Starmer Project: A Journey to the Right (Paperback)

Hailed as a human-rights champion and political outsider, what sort of politician is Keir Starmer really, and what mark is he making on the new politics of Labour?

In The Starmer Project, Oliver Eagleton provides a careful reading of Starmer’s record at the Crown Prosecution Service and as a member of Jeremy Corbyn’s shadow cabinet, tracing the political alliances he forged and the roots of his bid for the party leadership.

Starmer originally pledged to revitalise Corbynism with a dose of lawyerly competence. To understand what happened afterwards it is necessary to understand the man himself. So little remains known about Starmer that his actions are usually interpreted as overtures to others. On closer inspection, however, he is anything but an empty political vessel.
Oliver Eagleton is an Assistant Editor at New Left Review and Sidecar. He writes on culture and politics for the Guardian, TLS, Literary Review and Novara.
“A beautifully written and balanced study, revealing of the man himself.”
—Simon Jenkins, author of Thatcher and Sons

“The Starmer Project is the most original and insightful of the book-length studies of Starmer.”
—Oliver Sparrow, Guardian

“Starmer’s leadership cannot be understood without grasping the Corbyn project that flared to life in 2015, then decomposed and died in 2019. There remains, in most punditry, a lack of curiosity about that experience… Oliver Eagleton’s The Starmer Project, the best account of his leadership so far, sets out to correct this.”
—Richard Seymour, New Statesman

“The meatiest biography of the leader of the opposition to date.”
—Patrick Maguire, Times

“Brilliant, deserves to be widely read. It may end up as an obituary for Labour.”
—Donald Sassoon, Political Quarterly