Datafication of Public Opinion and the Public Sphere: How Extraction Replaced Expression of Opinion (Hardcover) 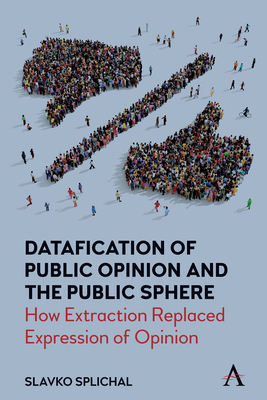 Datafication of Public Opinion and the Public Sphere: How Extraction Replaced Expression of Opinion (Hardcover)

The book, anchored in stimulating debates on enlightenment ideas of the public that culminated and ended in the early 20th century, focuses on historical changes in the core phenomena of publicness: possibilities, conditions and obstacles to developing a public sphere in which publics create, articulate and express public opinion by means of reflexive publicity within an established democratic public culture. Specifically, it is focused on three central topics:

The book seeks to transcend the division into normative-critical theoretical conceptualisation and "constructive" empirical application in the social sciences to show how critical theory can be empirically applicable and empirical research normatively constructive, and to demonstrate the need for greater connectivity between them.

Slavko Splichal is Professor of Communication and Public Opinion at the University of Ljubljana's Faculty of Social Sciences, fellow of the Slovenian Academy of Sciences and Arts and member of Academia Europaea. He is founder and director of the European Institute for Communication and Culture and editor of its journal Javnost - The Public.