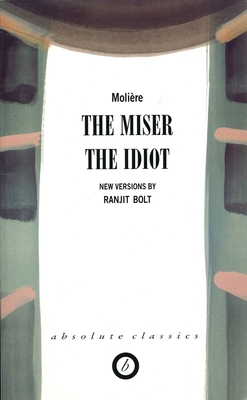 L'Avare (1666) is Moli re's great satire on materialism, a funny yet sophisticated story of cunning, guile and double-dealing, not only by the Miser himself, but also by the Miser's family and servants. First performed at the Festival Theatre, Chichester in 1995, it was revived at the Salisbury Playhouse in April 2001.
Includes L'Etourdi (1653), the first, the fastest, and perhaps the funniest of Moli re's verse comedies, in a new and highly entertaining translation.

Jean-Baptiste Poquelin Moliere (1622-73), the French actor-manager and dramatist, was one of the theatre's greatest comic classics. Inspired by traditions of French farce and the 'commedia dell'arte', he courted controversy with his satiric commentaries on the society of his time and on eternal human foibles, but was saved by the patronage of the 'Sun King' Louis XIV. Born in Manchester in 1959, Ranjit Bolt was educated at Perse School and at Balliol College, Oxford. He worked as an investment analyst and advisor for eight years, before concentrating on theatre translation from the end of 1990. Ranjit Bolt's acclaimed translations for the theatre, many of which are published by Oberon Books, include works by Moliere, Seneca, Sophocles, Corneille, Beaumarchais, Brecht, Goldoni and Zorilla.