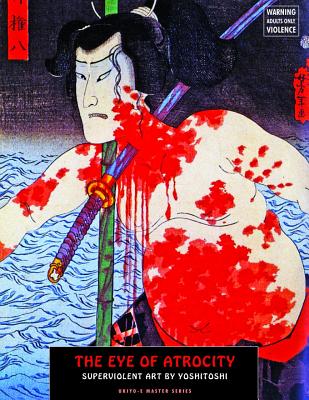 
Special Order—Subject to Availability
Tsukioka Yoshitoshi, apprenticed to ukiyo-e master Kuniyoshi since his adolescence, was twenty years old when he first began to make sketches of severed heads and dismembered corpses. Soon he would start to incorporate this imagery into his work, and his vivid and bloody battle scenes quickly caught the public eye. Most of Yoshitoshi's mushs-e ("warrior pictures") triptychs and series between 1861 and 1869 would include his trademark scenes of carnage, in particular Eimei Nijuhasshuku (1866-68), a collaboration with fellow artist Ochiai Yoshiiku. This series was an unashamed exercise in atrocity which took the concept of muzan-e ("cruelty prints") to new extremes of violence and gore. In 1868, Yoshitoshi was a first-hand witness to the Battle of Ueno, a cataclysmic clash which further inspired him to create new images of evisceration and decapitation. THE EYE OF ATROCITY collects and considers over 80 of the most blood-drenched and disturbing artworks produced by Yoshitoshi during his career, presented in large-format and full-colour throughout. NEW REVISED EXPANDED AND UPGRADED EDITION: Many new pictures, 8 extra pages, improved picture quality throughout, high-gauge paper stock.