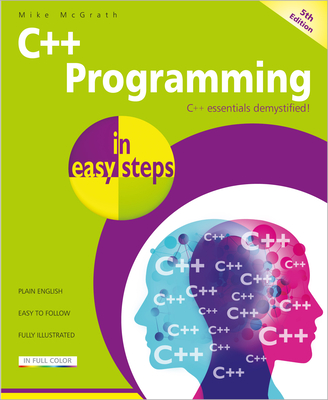 Shows you how to program in the
powerful C++ language, install a free C++ compiler, and create programs using a
modern C++ Integrated Development Environment (IDE), such as Microsoft's Visual
Studio Community Edition.

C++
Programming in easy steps, 5th edition shows you how to program
in the powerful C++ language. Now, in its fifth edition, this guide gives
complete examples that illustrate each aspect with colourized source code.

C++
Programming in easy steps, 5th edition begins by explaining how
to install a free C++ compiler so you can quickly begin to create your own
executable programs by copying the book's examples. It demonstrates all the C++
language basics before moving on to provide examples of Object Oriented
Programming (OOP).

C++ is not platform-dependent, so
programs can be created on any operating system. Most illustrations in this
book depict output on the Windows operating system purely because it is the
most widely used desktop platform. The examples can also be created on other
platforms such as Linux or macOS.

The book concludes by
demonstrating how you can use your acquired knowledge to create programs
graphically using a modern C++ Integrated Development Environment (IDE), such
as Microsoft's Visual Studio Community Edition.

C++
Programming in easy steps, 5th edition has an easy-to-follow
style that will appeal to:

Anyone who wants to begin
programming in C++.Programmers moving from another
programming language.Students who are studying C++
Programming at school or college.Those seeking a career in
computing who need a fundamental understanding of object oriented programming.

This
book makes no assumption that you have previous knowledge of any programming
language so it is suitable for the beginner to programming in C++, whether you
know C or not.