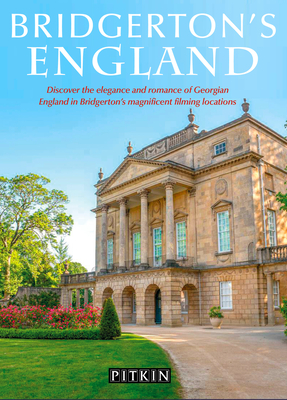 
On Our Shelves Now at:
Discover the elegance and romance of Georgian England in Bridgerton's magnificent filming locations.

Launched on Christmas Day 2020, Bridgerton has instantly captured the world's imagination with tales of romance in the Regency. It is Netflix's most popular original series with over 82 million households having watched it by the end of January.

Fans love the grand stately homes and sweeping classical landscapes which Producer Shonda Rhimes has tracked down to bring Julia Quinn's novels to the screen.

Bridgerton's England is a location guide to all the key filming sites in the series, and author Antonia Hicks links each real-life location to its fictional counterpart. Thus Winston Churchill's former gentleman's retreat, The Reform Club, becomes 'White's Club' where Anthony Bridgerton and Simon Basset meet to discuss infidelities and smoke cigars.

Sites include Stowe and Painshill Park, which presidents John Adams and Thomas Jefferson once admired, Henry VIII's Hampton Court, Castle Howard, Bath's Royal Crescent, Holburne Art Museum, Wilton House, Lancaster House and the most upmarket Air Force officer's mess in the world!
Antonia Hicks MA graduated from Oxford University with a degree in Ancient and Modern History. Her dissertation was titled 'Perceptions of adultery and marriage within the epistolary culture of the late 18th century' for which she undertook original research into the letters of the Duchess of Devonshire. She's a passionate fan of Broadway musicals and Bridgerton.